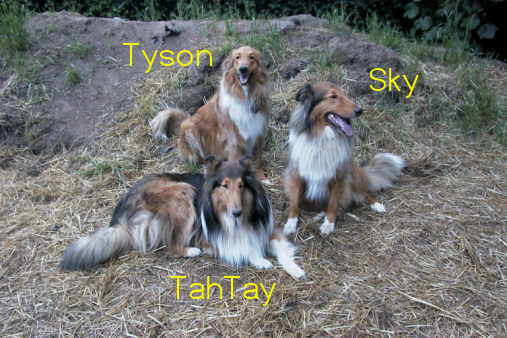 July 12, 2008
We are saddened to report that Tyson the wonderful giant of a collie, friendly to everyone, has passed over the rainbow bridge.

Do you remember 'Jeff's Collie' the first Lassie show?...
Tom Rettig, who played Jeff with Lassie on the hit TV series [later featuring Jon Provost as Lassie's boy] was a successful child star in Hollywood. He appeared in several feature films and on TV. As a young adult, he became a computer programmer of some reputation and great skill. Sadly, he passed away as young man, but before he left this world he wrote a "program" that anyone can "execute". It contains some important messages for everyone. You may find it here

"Snowy" March 16 2003.
A final thought...These pup were not bred to be "show" winners, since breeding for just looks and a "Show" is irrelevant to us. These dogs were bred to be all around champions of health, strength, character and good looks.

I believe we were successful and all of these dogs are living a happy life.
mail@jenalabs.com
"you are going to your new home to be loved forever".
At left, helping to care for the puppies is Joyce, at 4' 11" her size makes the Pup look bigger than he is. "Rhythms of Jazz". was placed in his new Michigan home.
His new name is just "Jazz".
And here is our female "Lochinvar Luck". She is to stay with us as a future mommy.

How Lucky she is.

Just above and to the Right is "Highland Fields", a female. We call her "Snowy" for short. She is with her new family.

Left and Right is "Lil Ray of Sunshine" a Female pup we sometimes called 'Splits'. Now known as "Kelly" - and lives in Saskatoon, Canada

To the Left and below is "Cinnamon Swirl" a Female Pup.

Below with her new owners William and Deborah.

Below and right is "Visions of Lad" a Male Pup is now living in Victoria BC in Canada with his new Mom Tracy. His new name is "Tyson" We have some new pictures of Tyson and will post them soon....
Jan 19 2003
To the left and below is a male puppy we call:
"Highland Sky" with his new family Barb, Karl and one of their children.

Above "Midnight Stars" a male pup.
"Midnight Stars" at right says goodbye to us as he is prepared to fly to his new home in New York state He is called "Justice" and now lives on a farm, doing what a magnificent farm collie loves to do.

Left and below:
"Midnight Memories" AKA "Mokie" a male pup.

At left:
A very happy family and their newest member.
Dream Dancers Midnight Expression.
AKA "Damian"
Look at the joyful expression of the girl.
Happiness is a warm puppy.

Below:
Our Pups, Cookie and TahTay were invited to be photographed professionally by Patricia Gayle Photography for use in greeting and holiday cards.

Here are a few pictures of hers of our dogs that she let us see....All of the images below in the white frame are copyright of Patricia Gayle.

Below are some of our puppies who have gone to good homes and some of their histories to the present...

Collies, Variations on a 'Working' Theme.
go to the new dedicated page for this article.

We have been asked an interesting question... Why do we call TahTay an "American Collie"? Additionally, other people have inquired about just what is a Scotch Collie and are they related to "Farm Collies"? To answer these questions, there is lot of history to cover, so lets just dive in and find some answers.... 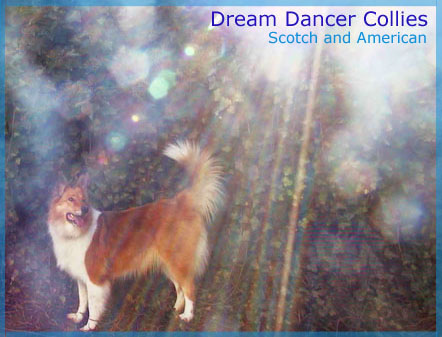 This page, hosted by JENA LABS has been moved to our second domain found here. http://www.jenatek.com/pages/collies.html
Hosted by

Above and left - Meet "Cookie" Scotch Collie
(Dream Dancers Oatmeal Cookie)
She is Intelligent, Lovingly watchful and very athletic. As a strong alpha, she keeps Tah Tay very strong as they play.

We wanted to just bring forth a hybrid that although makes the purest breeders cringe, the combination made some lucky owners a tremendous companion. A champion in their own right, even though there is no "blue ribbon" at the end of the day, there is the light and joy in the eyes of the young at heart of all ages.... Collies are companions and there gentle behavior is a matter of inherent record.
Daddy TahTay (at left) "helped" to create some young ones about a year ago. We are going to tell the story in pictures of were all of the young pups went, were they are now and we will cover their future.


The Pups took over a large portion of the yard and we had created a closed off section for them to safely play, roam and explore the world.
...